There's no technology without science, there's no science without data

In today's world, technology is far more popular than science, and this is an astonishing fact taking into consideration that one cannot exist without the other. It's not a chicken and egg situation of course, but in most young consumers of technology, and even some of the most savvy ones, technology seems to have displaced science of its "cool" status. Let's look at some stats.

Well, from the above we can see "Science" is typically more searched for, than "Technology". But this is not a good metric for two reasons:
1) People do not search for "Scientific" themes by putting the "Science" word on it. A quick look at scientific trends will reveal some specific trends like "Biotechnology", or "Global Warming".
2) For the same reasons as above people do not search for "Technology" but more the trends. Technology is so pervasive these days that we really need to split between the consumer technology and the enterprise technology. In consumer technology the smartphone is king and the obsession is still very much present in the market, so let's go with the two more popular models: "Samsung Galaxy" and "Apple iPhone". In enterprise computing the two main trends are "Blockchain" and "Artificial Intelligence".

So let's see how some of these trends stack against each other in Google Trends. First the two science trends we identified above: "Biotechnology" versus "Global Warming".

Very close! Global Warming had a sudden rise in the last month, but all in all very much comparable. So we can choose either one to stack against the technology trends.
Now let's look at both technology trends classes. First consumer technology.

Not a surprise that the smartphone market only has spikes whenever there is a new model out! In the case of the Samsumg Galaxy that spike is in February and in the case of the Apple iPhone that happens in September. Now let's see how the enterprise technology trends compare against each other. 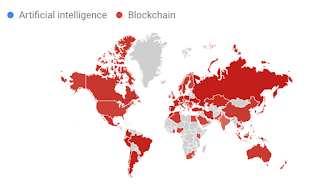 "Global Warming" is of course very language dependent. So we need to compare things that are either language neutral or in the same language. And that means comparing "Global Warming" from the science side with "Artificial Intelligence" from the technology side, and then "Biotechnology" from the with "Blockchain". And finally stack up the "winners" from both against each other and finally end this long rant about how Science is not as popular as Technology.

Don't lose sight of the title of this post. The fact that technology is a result of scientific discovery and technology is applied science is not clear to everyone, in particular the people who depend on technology, which is most of us in the developed world. I say "us" because if you are reading this you have to own a device to access the internet and that puts you right on the half of the world's population who has internet access. Which in itself is also a technology wonder. And that is precisely the point with today's wonder and awe: it's all directed at technology and very few at science. But science in order to move forward needs to use technology in order to process its data. Let's recap what is the "scientific method" and why it relies so much on data it captures from observation.

There are two important aspects to the scientific method that rely on its source data: data quality, and ability to store the intermediate results from all the experiments. Field science, applied science or even non-theoretical scientists have to come up with ways to speed up the process of testing hypothesis, which in turn will lead to other hypothesis, and this work can take years. It's a complex tree of ramifications of hypothesis and at each new level more data is generated, and the more ramifications and branches it creates, the bigger the number of combinations and the harder it gets to combine and process all this data. But can they all afford to store, analyse and process all that data? In most cases scientists and researchers work with simulation tools that will allow them to speed up the process of analysing the data generated in real time, or at the same time as the data is being generated.
So the frontier for the scientific research that will push technology to the next level is dependent on the data that science is able to process today, which in turn dependes on the technology of today. Unless we have a breakthrough in technology so big, that it will expand the limits of science research.

LMC
Amersfoort, Netherlands
Shifting the needle in problem solving. Data Science, Cloud Analytics, Innovation and Lateral Thinking. This blog represents my own view points and not of my employer, Amazon Web Services.